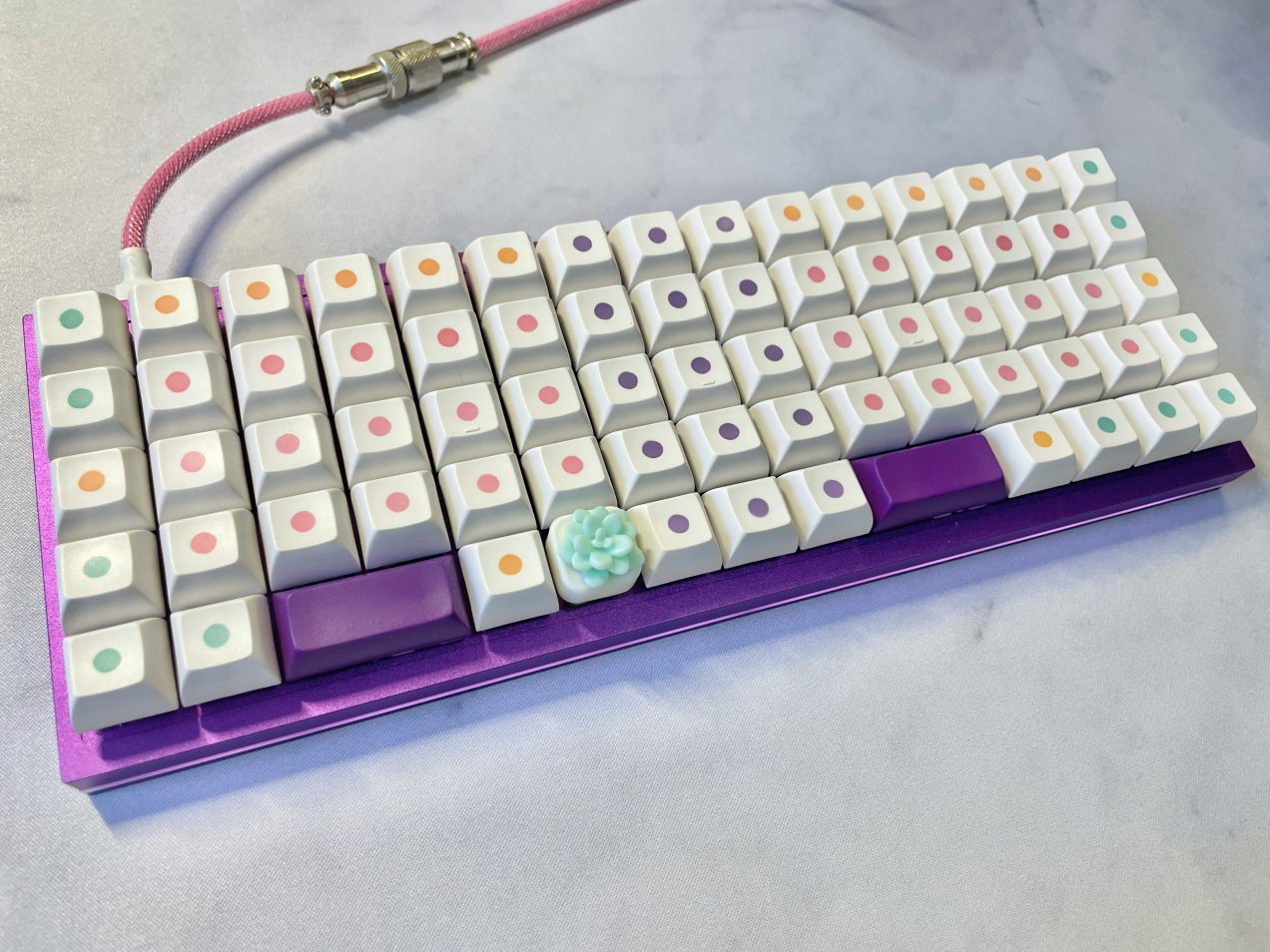 Like many people, between general interest and needing a pandemic-friendly hobby, I have gotten into mechanical keyboards. In browsing through endless photos of interesting builds, I discovered a really cool keycap set called GMK Dots by a really cool designer known as biip. Originally a joke, people loved them so much that they really got made. And I loved them! But as an idea, not the colors. Even now, with a round 2 coming including a light version, it’s just not for me. I also do not like Cherry profile keycaps, which is what GMK produces. The KAT Milkshake set, also by biip, had a Dots kit with amazing colors, but is no longer available and between commanding extremely high resale prices and not quite including the colors in the rows that I would prefer, it was not a reasonable option.

So, with copious credit to biip as the originator of the idea, I decided to make my own set using KAT Blanks, my current favorite profile, with pastel/vaporwave-ish colors to match my general aesthetic. KAT Blanks are made of PBT, which is compatible with dye sublimation (dye sub), a process in which things are heated up to the point where ink and surface fuse, creating a permanent print. With a number of retail dye sub products available, I decided this would be a fun DIY project.

I personally have a Cricut cutter machine, and they make both dye sub markers and dye sub sheets, so in the interest of having clean circles, I decided to use the dye sub sheets. I am also currently on a full grid ortholinear keyboard so I only need to worry about 1U keycaps for the moment. Here’s the specific process I used, and then below I will get into a bunch of details / a build log.

Using the Cricut software, I put a 6mm circle inside of a 12mm square – 12mm being the width/height of the keycap surface, and 6mm just because it was half of that and seemed right proportionally. I then “attached” these so they would be cut as one shape instead of the Cricut attempting to cut them separately for layering.

I hand-cut the squares out along the lines that were cut by the Cricut (presumably there’s some way to get it to actually fully cut through the backing on the square but I did not take the time to find out), and then peeled off the excess (known as “weeding”). This left me with a square of lightly adhesive backing that could be used to more precisely center the dot on the keycap.

In my test round, the adhesive backing alone was not enough to maintain consistent contact, which led to some interesting watercolor effects.

So to help maintain contact, I cut out little bits of an unused grill liner to kind of fill in the scoop and then used Kapton tape to secure all of that down. If you are able to let the tape sit for a few minutes before baking, it will stay adhered better.

Important to note is that you should not wrap the tape all the way around to contact itself, or else it will deform the keycap while hot. I found this out the hard way.

Also make sure your oven is properly preheated and has been preheated for a few minutes, and maintains temperature long enough not to kick on while the keycaps are in there, because ovens operate by allowing for a bit of a cycle above and below the target temperature, and can easily hit 425º while heating which will melt PBT. I discovered this, again, the hard way.

When unwrapping the tape, I recommend doing it slowly and from one edge so you can check on the dye sublimation. If it has not fully taken, you can lay everything back down carefully so it stays aligned and take it through another 4 minute cycle after cooling. Be warned that if you do not align precisely or its not fully in contact the dye will fuzz a little at the edges. You can also do another layer of dye if you accidentally throw away the original dot, which does darken a bit but not really overly noticeably so for these colors.

Finally, as for why 400ºF for 4 minutes. If you use something like a heat press, you should be able to get away with 75 seconds with light pressure using thin silicone mats to account for the curved surface. I also tried 395ºF which led to uneven dye sublimation, so it does appear to really require 400ºF, again noting that you will want to stay safely below the melting point of PBT which is about 425ºF. 4 minutes seems to give it enough time for all of the dye to fully sublimate into the plastic in the absence of significant pressure.

I did initially try a heat press but was unable to maintain even contact with the surface and it was clearly going to be time consuming with 70 keycaps to do, so having a precise oven came in very handy where I ran 15-20 through at a time. I really enjoyed being able to use some craft equipment that I have, and another nice thing in the Cricut ecosystem is that they sell dye sub ink markers in various thicknesses as well so you can draw directly on the keycaps or use a cutter or plotter to draw mirrored images to dye sub finer lines and custom art without investing all the way in a printer.

Finally, a shout out to the Cute Keyboard Club Discord, which has just the friendliest and most supportive people with similar aesthetics and love for endless tinkering.