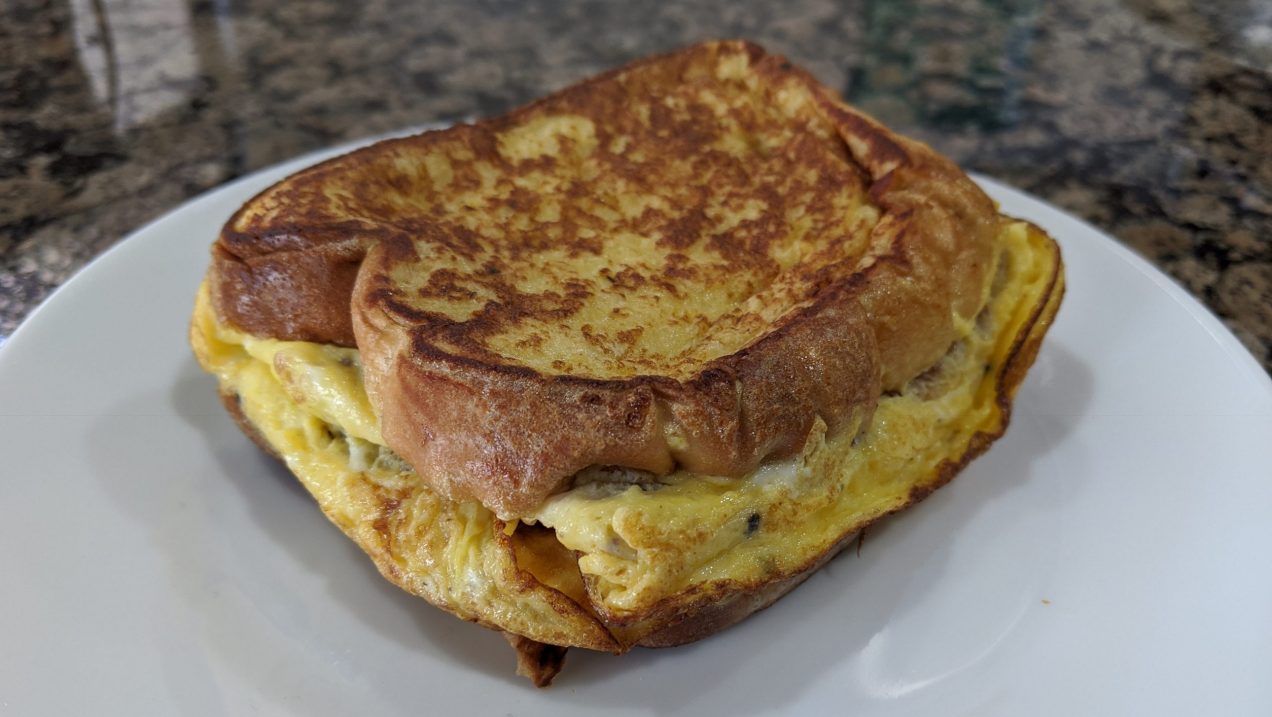 Just kidding I’m not going to wax poetic on virality. But, I posted this timelapse to Twitter once upon a time and later set it to a truly annoying sound on TikTok because I was curious about the video editor and have almost 3 million views there, which just goes to show it’s all meaningless. Anyway, people seem to like it, and of course I like it, and I’ve gotten a few questions about specifics like how many eggs, so I finally took some pictures as I made one this morning (sans bacon and cheese) so I could post about it.

Oh, and one other thing, I want to give credit to my two inspirations. The first is my dad, who doesn’t really like sweet breakfasts, so we grew up eating savory egg bread as a special breakfast item instead of French toast. The other is this video of an Indian street food called a bread omelette (among other things, I think?) that also got a lot of attention. It seemed like a smart way to not make a mess with fully dipping the bread and being a born New Yorker, egg sandwiches are always a good thing to me. My “egg bread” gets its name from my childhood and does not involve anything particularly special, but of course you can adapt as you like. If I have flowering garlic chives around, I will use them. The only thing I will say is that I am not open to commentary on the cheese from the original video – a proper New Yorker bacon egg and cheese is made with cheese that is engineered to melt, end of story. 🙂

This process goes pretty fast, so gather your necessary materials:

Heat up the pan while you beat the eggs

Heat your pan up over medium to medium-high-ish heat. If you like your eggs creamier, use lower heat. I like mine fluffier and slightly browned, so I use higher heat. It’s all preference. Beat the eggs with about the same amount of salt you’d use for scrambled eggs and some pepper if you like until foamy across the top, then beat in some milk (or water, or chicken stock, or leave that out, whatever).

Add oil to your hot pan

Drizzle a bit of oil in the bottom of your pan and swirl it around. You are welcome to try making it with less oil, but here’s a tip from Chinese cooking: we use at least enough oil to coat the bottom of whatever pan we’re using to scramble eggs in and heat it up hot because it makes them fluffier. If you like creamy eggs, don’t do that. Again, it’s up to you to figure out how you like things. Anyway, let the oil heat up until it shimmers a bit.

Pour in the eggs and dip+flip the bread

This is the part that most frequently seems to be missed upon recreation, so here’s a regular speed GIF. Since I’m using a regular sandwich loaf that has defined sides and is wider than it is tall, I want the the bottom sides to be facing each other post-flip, so I start with the top side facing the middle for the dip. Hope that makes sense. If you use square bread, that’s much easier.

After I’ve dipped and flipped, I scrape any remaining egg out of the bowl to cover any remaining dry spots on the bread. You don’t have to, but you have to let the eggs cook for a moment anyway so you might as well not have any waste. Cook the eggs until they’re mostly set – you can move the edges in and swirl the egg around if you want.

Next you want to get your spatula under the bread and flip the entire thing over. It might make a small mess if the egg is still super runny. Let the remaining egg set for a few seconds over the heat and then fold the edges of the egg in like so.

Now you’ll want to fold it so that the slices are stacked like a sandwich. Remember in the beginning where I said I wanted the bottom sides to face each other? That’s why. They’re flat so the fold is easier to manage. Anyway, toast each side until it’s lightly golden brown. I also like to prop it up with the help of another utensil and toast each edge a bit, that’s up to you.

The most important part!! It doesn’t need to look pretty if it tastes good! I use a knife and fork but I guess you could pick it up with your hands if you really want.

2 thoughts on “On virality, or an egg bread recipe”