Three years ago last Friday, I started with 10up. I had no idea what I was getting into, and would never have predicted that we’d go from me and Jake (and a contractor who soon after also came on full-time) to around 70 full-time employees world-wide, including a CEO. I also would never have predicted that I’d be a WordPress committer, much less leading the 4.0 release cycle.

At the end of July 2011, I went to WordCamp Boston. It was my second WordCamp (after NYC the preceding October), and this time I summoned up the guts to introduce myself to some of the people I’d been watching around the WordPress core development world. At this point I had been doing some WordPress development at my previous job for about two years, and had contributed two patches to core (here’s the story about my first one). They encouraged me to get on IRC and join weekly chats for both UI and core development, for which I am eternally grateful.

Recruiting full time #WordPress developer / PHP engineer. Work from anywhere. Interested? Know someone who might be? Get in touch!

In the week following WordCamp, I saw the tweet above, retweeted by somebody else. I hadn’t met him in Boston, and hadn’t noticed the 10up sponsorship, but for whatever reason it caught my eye. We were getting ready to move to Wichita for what could be short term (and turned out to be 11 months), and I felt that in fitting with what I wanted my future to be, working from home was the right next step. I wasn’t looking hard, but I was certainly keeping an eye out for what could be next.

My husband always loves telling the next part of the story: he and some friends were in the midst of one of their marathon study sessions for doctoral comprehensive exams, when I wandered out into the living room and announced that I was going to have a job interview in a few hours. Having each just suffered through the slog that is applying for professorships (in a testament to their strengths, all successfully), they looked at me like I was an alien. After said interview via Skype, I wandered back out and said that I was pretty sure I had a new job. The bewildered looks continued.

I had a lot to learn, that’s for sure. I had really bad days, and really awesome days. Learning how to manage myself, creating boundaries within my own home, unexpectedly having an email to a client published on their site, adjusting to life in Kansas, traveling more than I’d ever done before, and even an F3 tornado that passed extremely close by – nothing went as I might have anticipated. I didn’t understand what growing a business meant, or even really that we were trying to grow a business. All I knew was that most of the time I was insanely busy, and on top of the time that I was given at my new job to work on WordPress itself, I wanted to do even more. Oh right, and marriage, and still performing as a pianist here and there. I thought having a full-time job and two part-time gigs before was hard – this was way harder.

At WordCamp SF 2012, we had our first all-company meetup. There were 14 of us, including two new hires. We had a great time, including some of the best Cards Against Humanity moments I’ll cherish forever (shhh, don’t tell HR). There was an all-company summit the following April with 22 people, which I missed due to being on maternity leave. Then we had another meetup that October, which saw 35 of 39 people attend. And then, this past May, 62 of us met up at an awesome hotel in Scottsdale, this time calling it our Learning Summit.

This is, without a doubt, very intense growth. We’re still growing, although not quite at the pace we did between October and May (on purpose). Through all of this, one of the things I’ve been the most proud of is setting up and maintaining our group communications. We started with IRC and eventually added a bot, which ran off of my local machine much of the time. These days we use HipChat with a hubot-based bot – imagine joining a single IRC room with 70+ peers, some of whom have handles you don’t recognize. A scary prospect, and very noisy. In addition to all the directly-productive things focused rooms have given us, we’re also able to naturally get to know each other in whatever ways make us comfortable, whether that’s sharing of pictures of ourselves in silly hats in the big 10up watercooler room (which became a bot command, obviously), or talking about our kids in a dedicated parenting room. And did we ever need that room: there are about as many 10up kids as there are employees, and one is even a credited WordPress core contributor!

In the past three years, I’ve gone through several job title changes and job responsibility shifts. I have bad days, and will continue to have them, but I know they are short-term annoyances. On the whole, I have an incredibly fulfilling job where I never stop learning, the incredible privilege of working on a free open source software project I believe in, and above all, this incredible team of hard workers and dedicated learners to be a part of. You’re the best, #team10up! 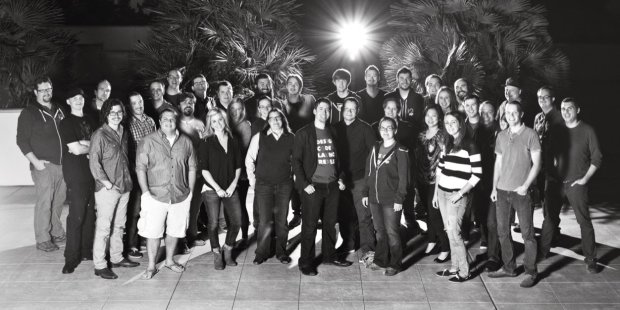