The house we bought back in June was an estate sale, meaning it was as-is (in good condition) and came with everything-I-mean-everything (fodder for another overdue post). The laundry room was a bit worse than some other rooms – older machines when we already owned nice ones, rotted out subfloor due to a window leak, disintegrating vinyl tiles, a random floating base cabinet, yellowed paint, boxes of cereal from who-knows-when – not the greatest. As usual, we didn’t get great before pictures, so you’ll just have to imagine it. Nothing tragic – just not a very happy place to do laundry.

My dad took the existing machines to install in a rental unit of his and the contractor who did our basement floor+ceiling fixed up the floor and window leak and tossed the base cabinet for us. Since then, we’ve:

I’m particularly proud of the table, not least because it cost me about $35 thanks to the glory that is IKEA desk tops, specifically the LINNMON series. Thought others might like the idea.

I had originally measured the washer and dryer for other reasons, and while walking around IKEA one day noticed that there was a gray desk top (to match the machines) that was just the right depth and length, and another smaller desk top in white that was exactly the same length as the height of the machines, to an eighth of an inch. I figured with some feet to raise the height just a bit so it could clear the water valve on the wall and a couple L-brackets, I’d be in business. But every time we went for the next several months, something else took precedence, until they went on sale through the IKEA FAMILY thing for a total of $29 instead of the usual $38. So we hurried up and painted the room, and then went and picked up the lovely desk tops up.

A lot of IKEA furniture is super lightweight because it uses corrugated cardboard between the exterior pieces, so I was a little worried about whether or not it would take drilling and screwing things in. However, upon inspection I realized that the corners are reinforced where you would screw legs in, and my plans for the legs and brackets would mostly be in those areas. I set up the pieces in their rough formation and determined that it was, well, perfect. I used the existing holes meant for legs as visual guides to get the brackets lined up evenly on both sides. The white side pieces are not as deep as the top, but it turned out to be exactly what we needed due to pipes running along the lower part of the wall and the dryer vent hose. I didn’t measure that part beforehand – I just got lucky. Recommend measuring first. 🙂

We went to Home Depot and got L-brackets, along with those leveling feet (apparently called furniture glides) for a few bucks. I have to admit, I was pretty excited to find those feet. Some marking, drilling holes, and wretched awkward tightening of screws later, we have a table/counter over our washer and dryer! It matches (yay) and it’s convenient (double yay) and, best of all like the bathrooms: clean. 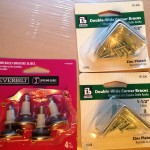 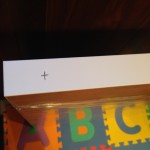 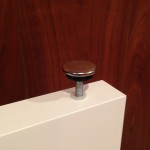 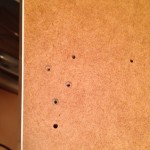 Marking and pre-drilling holes for the brackets 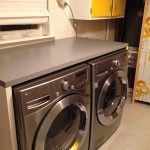