What happened to my leg 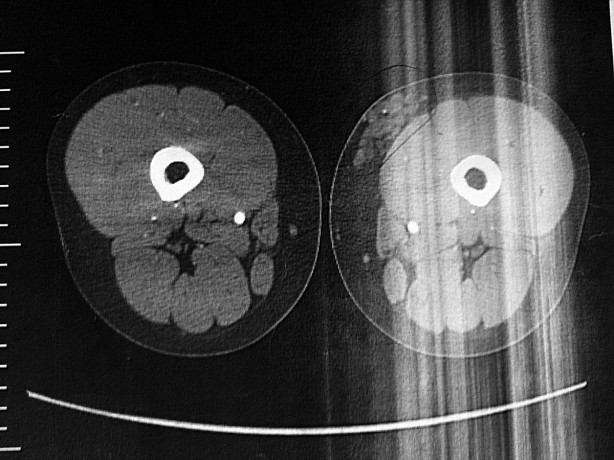 That’s an MRI of my legs, taken in 2009. I happen to like surgery and gory details, but I’ll try to keep this story non-graphic.

I was born with a knot of varicose veins in my lower right thigh. Congenital, as it were. Unlike a typical hemangioma, though, these never went away and in fact got worse as I grew. Imagine an ugly, bumpy, blue bruise-looking thing the size of two fists that rises out of the skin a good half inch, visible even through jeans. That’s what I had.

One summer in China, when I was about 12 or 13, my mom took me to some holistic healing doctor who held his hands over my leg while I lay there for long periods of time. Every time we left, it looked and felt much better, but it never stayed that way. Eventually I determined that it was getting better because I was lying still instead of standing up. An ultrasound of my leg back at home with my dad proved me to be correct: there was an extra fork of the femoral artery that was bunched up at the surface and, as it and its valves were malformed, blood easily pooled there, engorging and creating painful pressure.

When I was 14, I had a vein stripping procedure done while at my mother’s for that year’s summer visitation, removing the branches of the knotted veins. Her motivations for having me have the surgery so early aside (and possibly unclear), at the time it had started to spread from the thigh into the inner knee and worried all of us, in addition to causing me pain. The surgery left me with six small-ish horizontal scars, scattered across a six inch tall by three inch wide section of my leg. And for a while, I felt better. Still not a runner, but able to walk around without wincing. [1. It was during this time that we discovered that most narcotic painkillers make me hyper-focused instead of drowsy, with a horrific and completely debilitating crash at the end. I knit an entire child-sized blanket during my week of sitting still.]

Eventually, though, the veins that were still there began to fill and branch out again. By the time 2008 rolled around (I was 23), I had started to have to take the elevator for one floor and limped like crazy. Thanks to my awesome full-time benefits at the time, I started seeing a specialist and vascular surgeon to see what we could do. I had to wear an ugly pressure stocking for a few months before we could schedule a medically necessary, and thus covered, vascular tumor resection. That’s right: what was once just an ugly bunch of veins had become classifiable as a non-cancerous tumor with a 30% chance of recurrence.

If you refer back to the MRI at the top of this post, hopefully you’ll be able to make out an encircled area of lighter dots. Those represent the mass of veins and scar tissue that made up the tumor. If you look carefully, you can see just how much larger it was making that leg even when lying down, and that it was flattening the muscle. That’s what caused the pain, especially when I spent time on my feet and the veins swelled even more, pushing down on the muscle and sometimes even leaving me on the verge of tears.

The surgery went well; flawlessly, even, except for my usual low blood pressure and distaste for anesthesia. Because of the extent of the removal, I now have a long vertical scar on my leg and a slight divot. Directly after the surgery, it looked really bad, discolored and dented (those are pictures nobody wants to see), but over time and with exercise it has mostly filled in. Of the six original scars, three and a half of them are gone, removed with the 1.5 inch strip of excess skin. My legs are now essentially the same size – the right one is still a little bigger, but as a right-dominant, that is to be expected. I’ve further had a handful of saline injections to deal with some remaining veins, most of which seem resolved, but one continues to swell and be a nuisance when the weather is bad (low pressure = more swelling). My knee was mostly numb for about 6 months or so, and then went through a few very aggravating periods of pins-and-needles over the next year while the nerves regrew.

These days I’m working out and sometimes even jogging or walking an incline for a couple miles on our treadmill. I can be on my feet for much longer periods of time and can only see the slightest evidence of something abnormal when wearing thin pants or tights. I have to admit to feeling annoyed that at my age I’ve already had multiple surgeries (even more if you count wisdom teeth and related root canals), but I’m thankful that I took advantage of my one year of real health insurance and that I was able to do it without debt.

Feel free to share your gruesome medical stories with me, either here or via email 🙂 I love learning and listening!

One response to “What happened to my leg”