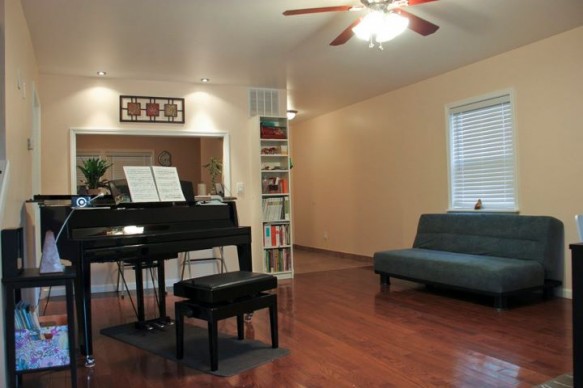 In January of 2010, I purchased the Yamaha AvantGrand N3 as a replacement for my aging keyboard and to prepare myself for life outside of school. Now, almost two years later and a unbelievable amount of music later, I’m revisiting my thoughts.

I don’t regret this very substantial purchase at all whatsoever. Not even for a moment. I’m not much of an early adopter and was initially worried about things like maintenance and warranty for such a large piece of technology, but now that we’ve moved it from Virginia Beach to Rochester to Wichita (update, 2012: and now Jersey City, back into an apartment – had to leave the pretty house you see above), I feel pretty confident about its longevity and durability.

All of the pros I previously listed still apply, and essentially all of the cons. I haven’t had any problems with notes dropping out recently, so perhaps it was a temporary thing or I’ve subconsciously adjusted. The lack of an intuitive readable control panel is still probably the most annoying thing. The touch obviously cannot be exactly the same as an acoustic grand, but I do find that some nuances are impossible to pull off, especially things involving pedal. Beethoven-style sforzandos just don’t happen as I’d like them to and I can’t use the barely-there touch to create that special kind of soft sound. So, again, not a replacement for a real grand piano, but still a fantastic instrument and perfect for a set of needs.

I did discover that the AvantGrand actually does a little harmonic resonance, so doing something like holding down some keys silently and playing lower ones will leave a little sound behind, as though the strings of the silently depressed notes are vibrating. It’s not as audible as an actual piano, but it’s pretty neat that they bothered to put that in there. The things that most people still find the most immediately impressive are the tactile response and, oddly, that weirdly accurate harpsichord sound. Pianists are very impressed by the feel of the keys and half pedaling. Several people have been caught by surprise to find out that it is digital and not acoustic.

Here’s some of the other music I’ve learned since that last post, to give you an illustration of how productive it is to have my own piano at home, even after working on web stuff all day:

These days I’m working on Messiaen’s Quartet for the End of Time (for December), Rachmaninoff’s Cello Sonata (last two movements only for now, also for December), and a large chunk of the clarinet repertoire in preparation for Adrian’s inevitable re-interview and faculty recitals in the spring. I’ve had to say no to area accompanying because I am already working a little too much, but it’s more than enough to keep me busy.

So, if you’re thinking about the AvantGrand and it fits your needs, you should try one out if possible!

P.S. If you look at the comments of my last post, the National Sales Director of Yamaha offered to send me an AvantGrand jacket and he really did. It’s way too big and not exactly pretty, but it’s still pretty awesome that it happened at all.

39 responses to “Yamaha AvantGrand N3: One year and 9 months later”