Update 2: I’m very slightly amending this post to make it less informal because of a shift in readership that I couldn’t have anticipated. It’s not because of this kind of garbage, although feel free to read what they quoted to see what sort of friend-oriented flippant sentences were here before.

Yep, I bought a new instrument. Here’s a little bit of backstory, some pictures, and my thoughts. 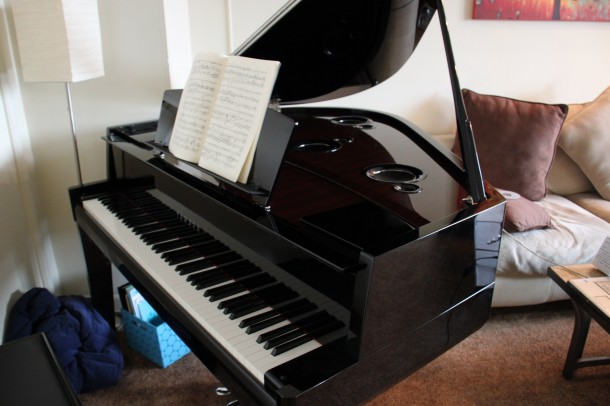 I’ve had a Technics SX-PR303 since 1995 and I still love it. Weighted touch sensitive keys, sounds galore, easy multi-track recording – I’ve used and abused the thing. It’s gone with me to gigs in Virginia Beach, in and out of several apartments in Richmond, and in both of my apartments here in Rochester. It’s dealt with me playing crappy musical numbers, singing while playing, and shoddily realizing figured bass without a word of judgment. But finally, the time had come to replace it. The damper pedal was going in and out and I just couldn’t do the level of practicing that I needed to do on it anymore.

In November, Vivian sent me this Slate article on this “digital hybrid” piano that Yamaha was touting. Besides the fact that it name-checked Donald in Mathmagic Land (a nice memory from grade school math class) and compared the Tactile Response System to an N64 Rumble Pak, I found myself thinking, “why haven’t all digital pianos been like this before?” Maybe it’s gimmicky, and anything with marketing speak is sure to sound that way, but it seemed sensible to me.

Fast forward to the Eastman Wind Ensemble’s performance at the Midwest Clinic in Chicago. I was fortunate enough to get to go along as a performer in the ensemble, photographer, and student-wrangler (more on that in another post), and lo and behold, there was a Yamaha AvantGrand N3 in the exhibit hall. Admittedly, it was very difficult to hear in that crowded conference room, with everybody else trying all sorts of band instruments, but I fell in love. I dragged everybody over to try it out, and started thinking about how I could justify buying a new digital instrument. 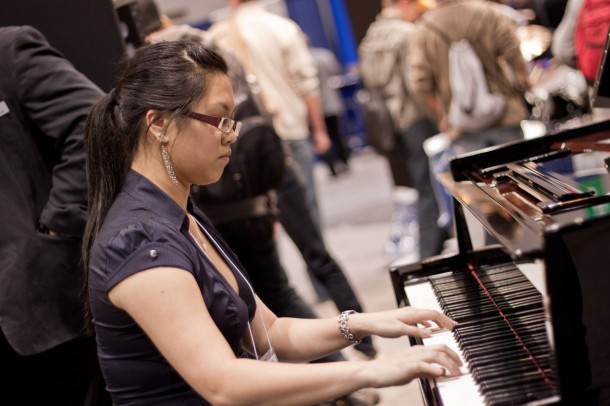 Some internal justification, phone calls, and measurements later, I bought it. It was just meant to be. Turns out that, while there were no dealers in the entirety of NYS, the Piano and Organ Warehouse next to my father’s house had one in stock and was willing to sell it to me for [redacted as of 2012] with no tax because I am no longer a VA resident. My father was unbelievably supportive throughout the whole process and went not once, but THREE separate times of his own accord to measure the instrument to be absolutely sure that it would fit in his minivan so that I wouldn’t have to rent a truck or pay for movers (also his idea). He found some friends to help get the piano into the van and let me keep it for a week and half while I recovered enough to make the long drive back down (made even longer by one of the VA snowstorms). Anyway, when I got back up to Rochester, a couple of percussionist friends and Adrian helped me move it upstairs, reattach the legs, and get it into place. So here it sits in our living room, beautiful and loved: 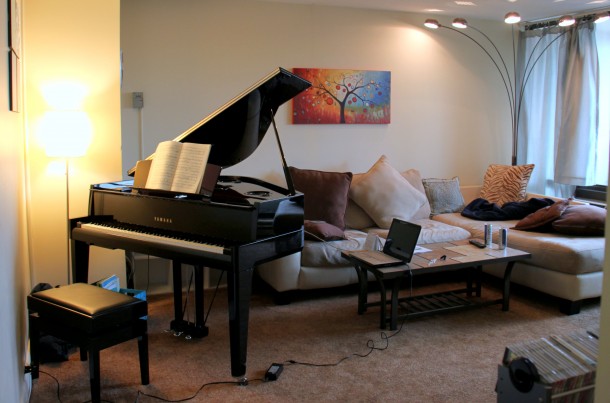 I’ve been doing quite a bit of practicing on it, as I have committed myself to a very musical semester. I’ve been working on: Brahms – E-Flat Clarinet Sonata (finally), Bruch – 8 Pieces for Clarinet, Viola/Cello, and Piano, Schwantner – Percussion Concerto (2 piano reduction), Bach-Busoni – Chaconne, John Adams – Chairman Dances, and a whole host of church music and other smaller things. Basically, I’ve really gotten a feel for this piano and how it helps me learn all sorts of styles of music, in addition to just how great it feels to be able to just practice when the mood strikes and be able to do more last minute learning (happens a lot in church). I wouldn’t call it an acoustic piano killer, but I think it has great potential as a practice instrument and even in places like churches where extended techniques aren’t necessary on the piano. Sadly, I won’t be playing Berg’s Vier Stücke on this thing.

Finally, my (former) professor, Dr. Jean Barr, came over for coffee and a little piano playing a few weeks ago and was very impressed by the touch, feel, and pedaling. I don’t expect it to be a performance instrument, but the blessing of my professor was enough for me. 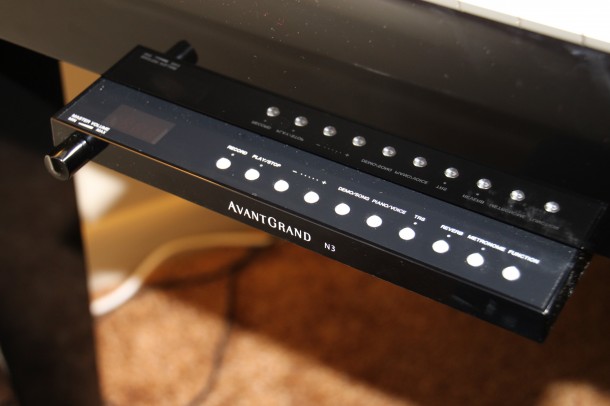 If you want more details about the instrument (including more talk about how it looks and all that, since I clearly didn’t end up writing a whole lot in that arena), here are a few links: